I hope you all have been paying attention to what’s going on in Ferguson, Missouri! No matter if you’re white, black, brown, purple or blue, what is going on in that city impacts us all! And just in case there is anyone who doesn’t understand why the black community is so upset right now, please read this article on Jezebel. It sums things up pretty nicely!

One great thing about Twitter is the instant access to news and the ease at which news can be shared with others. Thursday we all woke up to images of tear gas and men in riot gear. I thought I was viewing an image from Iraq; nope it was a picture of Ferguson, MO. Since when did Ferguson go to war? WTF! I spent most of  Thursday reading articles about reporters being arrested, the Missouri Governor showing up four days too late to appease his constituents, Anonymous threatening to release the name of the office who murdered Mike Brown (they released a name but apparently it was wrong; Twitter suspended their account) and so much more depressing news.  And after staying on my Twitter feed all day, I was pissed! Angry that another black man was killed by law enforcement, angry that Eric Garner was just killed last month by police in NY and earlier this week a mentally challenged unarmed black man was killed by Los Angeles police (he was shot while on the ground); upset that the Brown family joins the long list of families that have to prematurely bury their loved ones due to police brutality, angry at the militarization that took over Ferguson (attempting to suppress everyone’s first amendment right (both that of reporters and peaceful protesters), angry that what we are experiencing mimics similar scenes from the 60s, angry at law enforcement getting away with severely injuring or murdering citizens all over the country (I’ve read countless stories about people being beaten to death or injured while being unarmed and non threatening in the presence of cops), angry that I will have to teach my future kids about police brutality and the challenges they will face being black in America. Let’s just say I was internalizing a lot. SIGH… 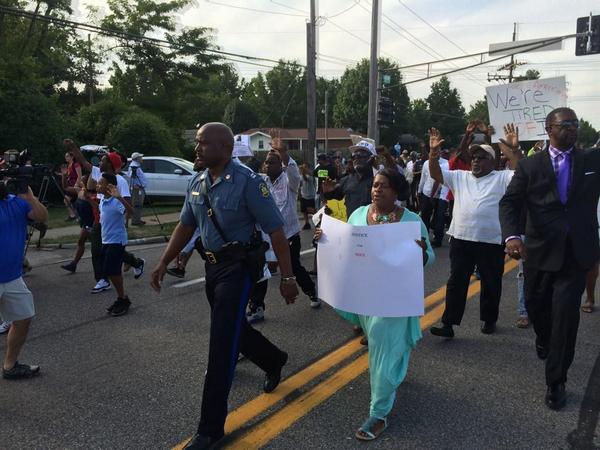 So after viewing that all day, I took a social media break for the rest of the day. I tuned on CNN and checked Twitter last night before heading to bed to see Missouri Highway Patrol Captain Ronald S. Johnson marching with protesters.  Johnson is a black man, Ferguson native and has a son, so he could empathize with the Brown family and protesters. When I turned on CNN, he was being interviewed and reminded everyone why they were out there: Michael Brown; that message seems to have gotten lost in all of the media coverage. Definitely a different tone than the one set by St. Louis County police. I was glad to see him front and center with protesters! Missouri Gov. Jay Nixon appointed Johnson to take over security and what a difference it made!!

Not only did Johnson march with the protesters, but he vowed to not blockade the street, to set up a media staging center, and to ensure that residents’ rights to assemble and protest were not infringed upon. Officers working crowd control, he said, have been told they must take off their gas masks.

Johnson spent a considerable amount of time talking to media, explaining that the decision to tone down the show of force was deliberate, a calculation he said was made by St. Louis County police officials. He said he met with protest leaders and the NAACP Thursday afternoon, asking them their plans for the march and telling them they could march without fear of restriction. After fielding more than a dozen questions, Johnson began walking toward the protests – it had broken off its route and doubled back.

Protesters said they were still angry, demanding justice for Brown and answers from local police about why he was shot and who the offending officer was.

But, they said, Johnson’s willingness to physically interact with them, rid the streets of heavy police equipment, and help them coordinate protests was a welcome change in tone.

“Thank you so much for being here,” said Karen Wood, who fought back tears as she held both of Johnson’s hands imploring him to bring answers to residents and maintain calm in the streets.

“This is about human rights, about human beings,” she cried. “It takes cooperation…our youth are out here without guidance, without leadership.”

Moments later, as he rallied the crowd and demanded justice and information about the shooting, the man with the megaphone declared:

“They respect us,” referring to police. “ So let’s respect them. They’ve given us the sidewalk so lets stay out of their street.” Although Johnson was just doing his job, I felt the need to highlight him. He spoke to protesters, walked with them and listened creating a level of trust that surely doesn’t exist between the police department and residents in Ferguson. This is also an example of why diversity on that police force, and forces across the country for that matter, is so important (out of 53 officers in Ferguson, 50 of them are white)! Having Johnson there not only creates an environment of respect but protesters also feel like someone in that city finally understands what they are going through.  This is the type of protest we should’ve witnessed from day one!  The St. Louis County police and SWAT team could take a few notes on how to properly handle peaceful protesters and reporters! Showing up in SWAT gear with riffles, tear gas and rubber bullets doesn’t create an environment of peace and respect; it creates one of fear and chaos.

Let us pray that justice is served!

If you would like to assist the Brown family with funeral and burial expenses, travel and living expenses of the parents as they seek justice for their son, Michael Brown, Jr, please click here to make a donation. The PINK Party co-hosted by A Diva State of Mind!

In honor of Breast Cancer Awareness Month, A Diva State of Mind and Urbane Lifestyle and..